The Village Heights / The Other Side of the Fence project is a working relationship between the City of Cape Town and civil society through a number of registered volunteer non-profit organizations and individual volunteers.
From the perspective of the City of Cape Town -, “The Other Side of the Fence” is a pilot project, which aims to connect the informal settlement of Village Heights with the adjacent nature reserve “False Bay Nature Reserve”. It thereby seeks to improve nature protection while fostering social and economic development within the community.
Because of the committed involvement of the City, Zandvlei Trust, a long-standing environmental NGO, adopted Village Heights Community Centre as a project in 2012 due to its proximity to Zandvlei and to Rondevlei Nature Reserve, as well as the community’s commitment to rehabilitating the surrounding natural environmental whilst uplifting the local community. 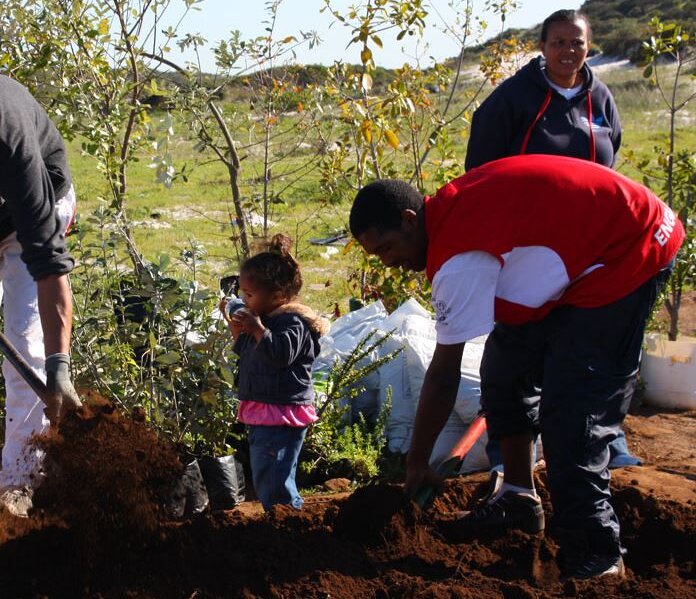 In 2012, in light of the national strategy on buffer zones around protected areas, which encourages positive relationships between nature reserves and their surrounding communities, the “False Bay Ecology Park” Steering Committee introduced an initiative, ‘Friends and Neighbours’, which sought to build these relationships in order to integrate the park into local landscapes, for both the conservation of the park and the benefit of those living adjacent to the park. This Park has now been consolidated into the False Bay Nature Reserve, protected under national legislation. In 2014 it was approved as a Ramsar Site, under a United Nations convention protecting wetlands for migratory birds.
Village Heights is an informal settlement near Lavender Hill in Cape Town, South Africa, situated on the western boundary of the nature reserve. Its community faces a variety of challenges, including exposure to extreme weather patterns, environmental degradation, insufficient access to public services, unemployment and drug and alcohol-induced violence. These negative conditions often spill “over the fence” into the neighbouring reserve, emerging as issues of illegal access, illegal harvesting of resources, illegal dumping, criminal behaviour and land invasion. In an attempt to address these issues, through a connection with a local kindergarten teacher, the Friends and Neighbours initiative, “The Other Side of the Fence”, was established at Village Heights.
The project is currently supported by a multi-stakeholder partnership and draws together the resources and input from local and provincial government and non-governmental organizations. With the assistance of Zandvlei Trust, Village Heights Community Centre has been registered as a non-profit organization.

The project is motivated by the need to increase awareness of and appreciation for nature and its conservation. Initially it began with the objective of creating stronger lines of communication between the Village Heights community and the Rondevlei section of the False Bay Nature Reserve, located just 100m from the settlement “on the other side of the fence”.
Realizing the need for a people-centred approach to nature conservation, the project strives to understand the needs and desires of local dwellers to ensure community buy-in to the programmes and projects run by the nature reserve, and improve environmental literacy among community members. In strategic alignment with the City of Cape Town’s Integrated Development Plan, “The Other Side of the Fence” promotes the relationship between the community and their surroundings, builds social capital, and maintains and enhances ecosystem services.
This way, out of the initial activities focused on the environmental aspect, many necessary social programmes were identified by the community, which have in turn attracted other helping organizations, volunteers and community participants. 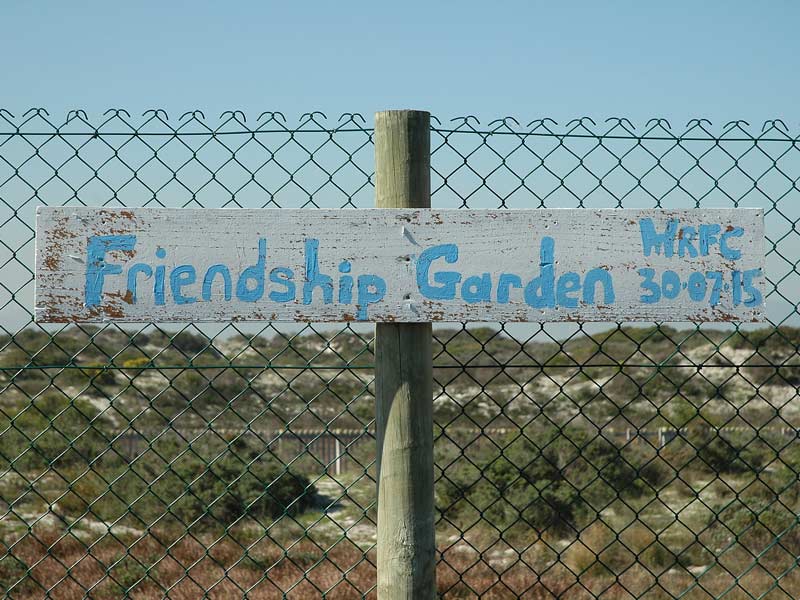 Through the City activities, early community consultation elicited five specific projects which could be achieved in the short to medium term: clearing illegally dumped waste, removing alien invasive vegetation, building a children’s play area, developing food gardens and planning and implementing a nature garden between the Nature Reserve fence and the informal settlement.
The first four of these initiatives have been successfully implemented although resource constraints have created challenges with regard to maintenance of certain projects. Funding for the nature garden delayed this initiative, but sourcing of funds from national government has enabled this project to proceed through project design (which flowed from a co-design workshop with community members) into the start of implementation in early 2017. However a number of social and logistical challenges have slowed progress.
With registration of the community centre as an NPO and ongoing administrative support by Zandvlei Trust to teach the members the formalities of successfully managing an NPO, and with substantial input from Projects Abroad (another supporting organization), many other activities have been started and continue to run. These activities range from community library, child care, homework help, surfing for different age groups to the community vegetable garden; youth and adult development programmes, including an eco-buddy programme for after school hours involving recycling and environmental initiatives for learners (coordinated by Cape Town Environmental Education Trust (CTEET); crochet knitting and sewing classes; assisted feeding programme; catering for small functions and more.
Several Arbor and Mandela Day celebrations have been run, during which community members and external volunteers were involved in a variety of activities, e.g. cleaning, planting trees and vegetable gardens as well as educational activities with children.
All these activities have contributed to the development of a project, which adds value and resources to the lives of some of the people at Village Heights. The success of this project is heavily reliant on community engagement as well as strengthening of the feeling of belonging and harnessing of the existing social cohesion among the community members. Regular community meetings and workshops are held to collaboratively develop solutions to existing challenges.

This project demonstrates that reconnecting people to the biophysical environment has socio-restorative potential, which can be seen from the socio-ecological performance of the project. For instance, clearing of invasive exotic vegetation along the periphery of the community has transformed a site previously used for criminal activity into positively functional open space, mitigating environmental threats and reducing the risk of fire hazards to the community and nature reserve.
The initiative has contributed to urban sustainability and resilience by improving the surrounding environment, cultivating a sense of pride within the community, and alleviating poverty where short or long-term employment opportunities are presented. 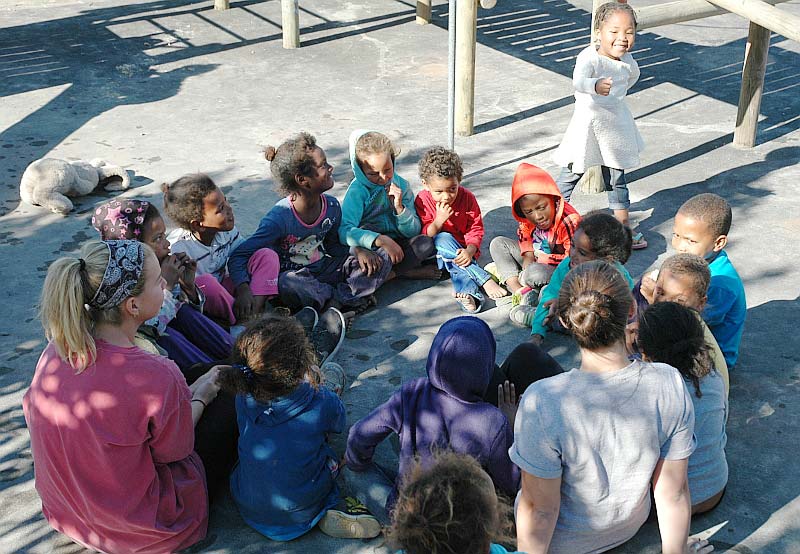 The Village Heights/Other Side of the Fence initiative has potential to improve ecological literacy, create innovative and effective partnerships, bring many different benefits to local people and enhance the functioning and attributes of protected areas.
To enhance community engagement, care must be taken to ensure that all relevant community stakeholders are represented and involved in the project design and implementation process.
There is renewed focus to ensure establishment of a community nature garden as well as a community centre and “kickabout” field for soccer and netball, although funds for the latter two are still sought. A community garden promises to contribute a much-needed greening aspect to the community, which has little opportunity to access the many benefits that offered by open green space and a fully functioning natural environment. Through the various aspects of the project, challenges related to waste management and recycling, human settlements and ecosystem services will be addressed sustainably.

To get a deeper understanding of the Village Heights project as well as learn more about the everyday life of local residents, Connective Cities kindly invites you to read a report by Camilla Zard, a Village Heights volunteer, having worked with the community as part of her internship. The report gives a very personal touch to the story of "The Other Side of the Fence" initiative.

Information about Village Heights on the website of Zandvlei Trust
http://www.zandvleitrust.org.za/...

The official website of the City Council of Cape Town
http://www.capetown.gov.za/