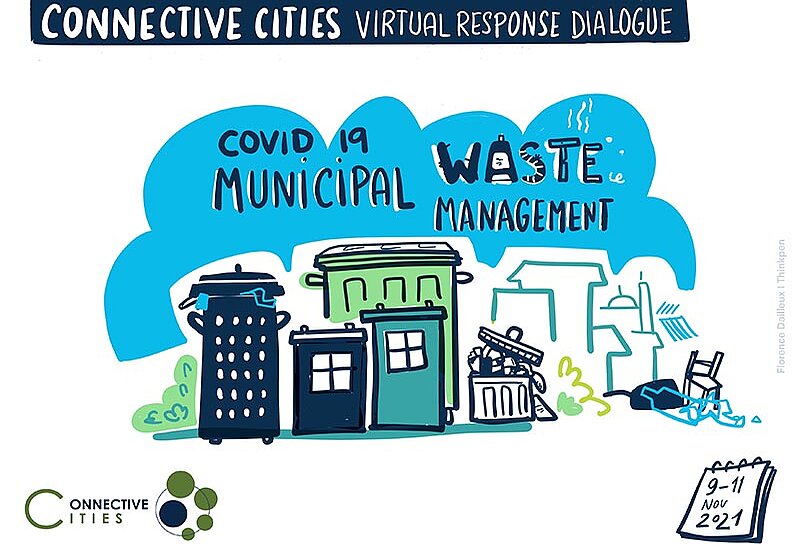 The COVID-19 pandemic has left a significant mark on municipal waste management worldwide. During the lockdowns, quantities of private household waste have increased, while commercial waste has decreased. Strict hygiene measures are required when collecting and sorting waste – a service that must continue to function everywhere despite the more difficult conditions created by the pandemic. Many municipal waste companies were unprepared for a digital way of working and, in some cases, have come under financial pressure. In the long term, the pandemic demonstrates that a shift towards a circular economy is an essential strategy for sustainability.

These and other topics were on the agenda at the Connective Cities Response Dialogue “COVID-19 and municipal waste management: Response to the pandemic and post-pandemic outlook”. On November 9 and 11, more than 20 participants from seven countries shared their experiences online. They also advised each other on how best to address current challenges in municipal waste management, and how to incorporate lessons learned from the crisis into long-term operations.

Since the start of the COVID-19 pandemic, people have been ordering more goods online than ever before. At the same time, many private households have been disposing of superfluous items. As a result, some landfills were overloaded at times. According to Gabi Schock of the German Association for Waste Management (DGAW), the key message of the pandemic is: We need to massively push Sustainable Development Goal (SDG) 12 of the 2030 Agenda – ‘Ensure sustainable consumption and production patterns’.

The European waste industry is currently undergoing a major shift towards a circular economy, which has been gaining momentum since the start of the COVID-19 pandemic. At the beginning of 2021, the European Parliament decided to go waste-free by 2050: all products produced in or imported into Europe would have to be reusable, repairable or recyclable.

A circular economy requires, amongst other things, functioning collection systems, trained workers to repair technical equipment, more rental systems as an alternative to buying new equipment, and meeting points for citizens to swap, borrow and repair things. In the business sector, it requires waste from companies to be used as a raw material for others.

'For a circular economy to succeed at the local level, local councillors and administrators need to set a good example. Also, there must be a change in mindset throughout society.'
Gabi Schock, DGAW

The German Association for Waste Management (DGAW), the Brazilian City of Belo Horizonte and the country office of the Deutsche Gesellschaft für Internationale Zusammenarbeit (GIZ) in Kosovo, representing the two Kosovar municipalities of Gjilan and Vushtrri, presented proven approaches for efficient and sustainable waste management during and after the pandemic:

When Germany's first pandemic lockdown began in March 2020, the DGAW forecast the expected waste flows from industry, commerce and private households. This was designed to provide an indication of the capacity utilisation of waste facilities in Germany. The DGAW predicted that municipal waste would rise sharply, as people were working from home, cooking more at home and producing more waste at home. It also predicted that commercial waste would decline significantly in tandem with GDP. A year later, the DGAW produced an update to its forecast and found that its predicted numbers had been quite accurate. The only thing was that its forecast for economic trends had been too negative, which meant that it had also underestimated commercial waste volumes.

One year after the first lockdown, litter in public spaces is still a problem, as people are still buying many meals and drinks to go. Municipal waste management companies in Germany responded to this by installing larger waste bins, or emptying the existing bins more often.

'During the first year of the pandemic, waste volumes in Germany remained stable. However, there was a shift towards less commercial waste and more municipal waste.'
Isabelle Henkel, Managing Director, DGAW

In the Brazilian city of Belo Horizonte, local government, non-governmental organisations, universities, cooperatives involved in waste management, and individual waste collectors worked together to develop COVID-19 hygiene guidelines for collecting and sorting recyclable waste. The people collecting or sorting the waste adhered so well to the guidelines on wearing protective equipment, disinfection and distancing rules that only one per cent of them became infected with COVID-19 while working. This was also helped by the municipality's online training on hygiene rules.

'The waste pickers, some organised in cooperatives and some operating as individuals, were given high priority in the vaccination campaign. Ninety-five per cent of them are fully vaccinated.'
Bernardo SM Ribeiro, Office of International Affairs, City of Belo Horizonte

Gjilan and Vushtrri were the first municipalities in Kosovo to establish crisis teams during the pandemic. They helped to ensure that waste collection continued to function despite a lack of government support and digital work processes. Furthermore, by communicating directly with the central government, they succeeded in ensuring that waste companies received financial assistance from the central government during the pandemic. As one of the lessons learned from the pandemic, the two municipalities developed plans for future crisis situations.

'Regular drills and crisis simulations could be a good approach to ensuring that key processes work in an emergency.'
Vjollca Behluli, GIZ Country Office, Kosovo

In the Palestinian municipality of Al Maghazi, people often dispose of garbage not in the bins provided, but next to them. In order to change this, participants proposed, amongst other things, a social media campaign, a rubbish collection competition and the installation of additional rubbish bins.

In Belo Horizonte, many waste collectors work independently rather than be organised in a cooperative – a trend that has increased during the pandemic. However, such membership would offer them many advantages, including social security. To encourage more people to join a cooperative, the municipality should clearly communicate the benefits of membership, and do more to involve individual waste pickers in the waste management system. Furthermore, waste pickers could also have the option of selling the recyclable waste to the cooperatives.

Finally, the Kosovar municipalities of Gjilan and Vushtrri were advised to counter their chronic shortage of financial resources by (i) generating more profits through recycling or a circular economy, (ii) applying for grants, or (iii) introducing a landfill tax, as is done in the Netherlands, for example.

The participants agreed that the waste industry worldwide should use the knowledge gained during the pandemic to better position itself for the future. This includes establishing a circular economy in the long term, and generating new sources of revenue, for example through improved waste sorting and recycling. Communicating with different groups in the sector helps encourage successful initiatives, and is a source of resilience. This communication must be gender-sensitive, as the good practice of Belo Horizonte during the pandemic has shown.

The participants of this Response Dialogue are encouraged to stay in contact with their partners and with Connective Cities, and to further develop the discussed topics into cooperation projects. Connective Cities will continue to offer demand-driven dialogues on relevant topics, and further expand its network of municipal experts in the process.

The city of Krusevac during the pandemic