About a quarter of the Macedonian population lives in the capital Skopje. The City of Skopje is not only an important transport hub within Macedonia, but is also the hub of the transport corridor from Central Europe to Greece.

The cityscape is characterized by a high volume of motorised traffic and frequent traffic jams, 90% of the population owns a car. Despite investments in cycling, such as the development of a network of bicycle paths, the proportion of cyclists is still very low. Many citizens do not regard bicycles as a safe and reliable means of transport, and many motorists do not pay enough attention to cyclists.

In order to improve the traffic situation in Skopje and to make the city more liveable and sustainable, a new bicycle concept is to be developed for Skopje. The city's goal is to increase the proportion of cyclists from the current 2% to 5% by 2020. The infrastructure for bicycles is mostly already in place. In the last 5 years, the cycle path network has been extended by 60 km. In addition, the city offers subsidies for residents to buy bicycles.

The international exchange platform Connective Cities and its initiators, the Deutsche Gesellschaft für Internationale Zusammenarbeit (GIZ) GmbH, the German Association of Cities and Engagement Global / Service Agency Communities in One World, organized a local project workshop on “Skopje Velo-City: increasing the number of cyclists in the Macedonian capital city” from 13 to 15 December 2017 in Skopje, Macedonia to specifically look into good practices, challenges and solutions to this topic. The event was organized in collaboration with the City of Skopje and the GIZ project Open Regional Fund for South East Europe - Energy Efficiency.

The City of Skopje took part in a Connective Cities event on sustainable mobility in June 2017 in Bremen, Germany and presented its cycling concept. The objectives of the workshop in Skopje were to provide recommendations on how to increase the number of cyclists in Skopje and to support the networking of all relevant stakeholders. The workshop brought together representatives from different city departments, civil society, public enterprises and the public sector. From Germany, cycling and urban transport experts from the Cities of Mainz and Witten as well as from the GIZ sector project Sustainable Mobility and team red  Deutschland GmbH presented their good practices.

The workshop provided, with the municipal input of the City of Skopje, a better understanding of the Velo City concept, the challenges the city is facing in regards to cycling and what has been reached so far. Furthermore the workshop enhanced working relationships between and among different stakeholders that will lead to a more sustainable urban development.

Recommendations and proposals for measures to the number of cyclists in the City of Skopje were formulated. In working groups three areas have been identified as the ones where changes are necessary to achieve results, namely: infrastructure, social and framework transformation.

Regarding the infrastructure transformation it was suggested to expand the bicycle network to the municipalities, to design a new intersection as pilot project, to monitor bicycle accidents in order to prioritize actions, to organize a conference for cycling infrastructure design and to change legislation for the cycling infrastructure (design guidelines). To change the mindset of people (social transformation) several ideas for campaigns were developed, e.g. a Video Bike Festival, Celebrity zone bikes, trainings for adults, Velo Tourisms, Velo Radio. To take action in framework transformation the following key areas have been identified: coordination of municipalities, design guidelines, financing and enforcement of law. To follow up the recommendations and ideas the participants decided to set up a round table that involves all relevant stakeholders to start working on details of each area and to have a regular exchange to implement, promote and cooperate to increase the number of cyclists in Skopje.

Skopje Velo-City: Increasing the number of cyclists in the Macedonian capital 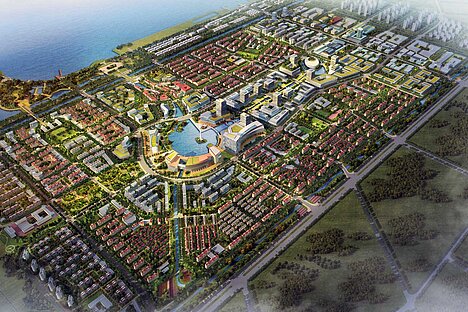 Daqiuzhuang has traditionally been an important industrial site, especially for the steel industry.