Together with the municipal administration of Durban (eThekwini Municipality), Connective Cities ran an Urban Nexus Training programme in Durban, South Africa from 16-18 November. With this event, Connective Cities supported the concretisation of the project idea for the urban regeneration of the Urban District of Isipingo, in Durban’s south (eThekwini), which had already been developed as one of five concrete project ideas in the context of the regional Dialogue Event in Africa on the topic of “Rethinking urban upgrading” in June 2016.

Following the workshop in June, the working groups continued to develop the project proposals in virtual exchange with Connective Cities. In order to qualitatively enhance this change project in its start-up phase and support it when it is ready for implementation, Connective Cities has met the request of the Area-based Management Unit and the Urban Management Forum of Durban to run an Urban Nexus training programme locally, in Durban’s south.

Training facilitated broad participation and a discussion base for the relevant actors, in particular for the District of Isipingo. The 36 participants comprised members of various specialist departments of municipal administration in eThekwini, representatives of civil society and the private sector and some urban district managers from other urban districts of the Area-based Management Unit.

Training was aimed at strengthening the integrated planning approach along the lines of the Urban Nexus Approach, incorporating holistic cooperation across the various specialist departments of municipal administration in concert with civil society and the private sector. The idea was to promote a common understanding of the context and develop approaches among the various stakeholders and jointly develop concrete integrated measures.

In detail, the Urban Nexus Planning and Management Tool was applied to analyse the strengths and challenges in the various specialised sectors and the relevant stakeholders and to identify the synergy potentials between the various sectors. Based on these possible synergy potentials, the participants developed specific cross-sector, integrated and resource-efficient packages of measures for the Urban District of Isipingo in working groups. Also, the integration of relevant stakeholders was discussed and the feasibility of implementing the measures was evaluated in this context.

As a follow-up process, the Urban Management Forum of the Urban District of Isipingo has already arranged for its next working event to be organised as a workshop in which the packages of measures, prepared on maps and in views of the respective streets, are to be presented and implementation is to be commonly prioritised. 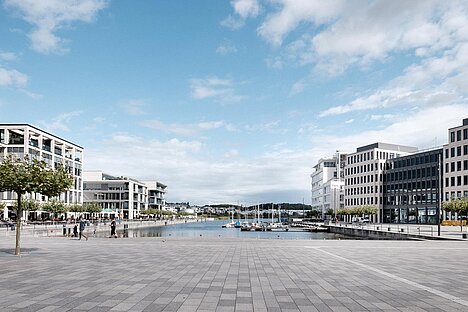