Used Vehicles and the Environment 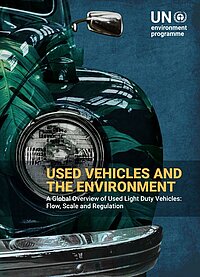 Millions of used cars, vans and minibuses exported from Europe, the United States and Japan to the developing world are of poor quality, contributing significantly to air pollution and hindering efforts to mitigate the effects of climate change. The UNEP-report shows that between 2015 and 2018, 14 million used light-duty vehicles were exported worldwide. Some 80 per cent went to low- and middle-income countries, with more than half going to Africa.

The first-ever report of its kind, calls for action to fill the current policy vacuum with the adoption of harmonized minimum quality standards that will ensure used vehicles contribute to cleaner, safer fleets in importing countries.

2020 - Towards Sustainable Development in Metropolitan Regions, Precincts and Places