The Innovation and Start-Up Summit took place in mid-November 2015 in the Chinese city of Chengdu as part of the 10th EU-China Business and Technology Cooperation Fair. Both the Fair and the Summit were implemented by the EU Project Innovation Centre (EUPIC), a non-governmental organisation established in 2006 as part of the Asia Invest II Project. EUPIC acts as a platform to promote trade, investment and technical cooperation between the European Union and China.

The purpose of the Summit was to promote foreign start-ups in China. It was attended by a total of 500 invited participants from the realms of government, business, public administration and academia, including some 200 guests from the EU and other nations. In the run-up to the event EUPIC sought out invited speakers from Germany on the topics of ‘municipal business development’, ‘current research on start-up promotion’ and ‘accelerators and innovation labs. The International Community of Practice – Connective Cities – was able to provide EUPIC with appropriate actors for these tasks who had already made active contributions to its own work processes.

For instance, the Connective Cities team approached Florian Schweer, Managing Director of FSBV GmbH in Stuttgart, as well as Tobias Martens, who is conducting research on the digital transformation and is also a business analyst. Daniel Rieth was invited as a representative of Enpact, a non-governmental organisation with a mission to strengthen business relations between young entrepreneurs in the Middle East, North Africa and Europe. Connective Cities also contacted Gabriele Böhmer, Director of the Entrepreneurship Strategy, Innovative Technology and International Affairs Section of the MGH-Münchner Gewerbehof- und Technologiezentrumsgesellschaft (a business and technology company based in Munich). The team also approached Georg Fürlinger, a PhD candidate in the Innovation Systems Department of the Technical University of Vienna.

Although the participants were motivated to attend by their interest in the host nation China, each of them was also driven by something else as well. Florian Schweer explains: ‘Where business is concerned, Europeans tend to look toward the West. Yet much that comes from the USA cannot be transferred directly to the European context, nor is it compatible with European culture. The conference in Chengdu provided an opportunity to gain ideas from other region of the world and generate potential for business contacts’. Gabriele Böhmer was motivated to come because: ‘Many Chinese delegations from various fields are present in Munich – start-ups, business people, health tourism. This conference offered an opportunity to get to know the Chinese start-up scene and other stakeholders in their own setting.’ Georg Fürlinger was visiting China for the second time after having first been there in 2009. He wanted to gain an impression of the current state of development. He was also enticed by the possibility of making new and exciting contacts.

After day one of the conference, which focused on providing information on current start-up projects, day two moved on to B2B matchmaking plus visits to Chengdu’s Urban Development Centre and its High-Tech Zone. The Urban Development Centre provided a clear demonstration of the host nation’s vision. The ‘handball court-sized model’ of the city alone was enormously impressive. Florian Schweer summed up his appreciation of what he saw rather figuratively: ‘There you can literally breathe in the huge ambition and goals.’

The enormous economic motivation of the host country was also evident from the speed with which large-scale infrastructure projects were being realised in the High-Tech Zone – such as the construction of wind power plants, passenger aircraft and medical equipment. Georg Fürlinger drew the following comparison between the different approaches of China and Europe: ‘In Vienna they are currently building five underground railway stations. In Chengdu they are building five entire lines.’ Day three of the conference was devoted to a field trip to the satellite city of Nianyang, where participants also met with representatives of the regional and local authorities.

Overall the participants rated the conference positively. Gabriele Böhmer summed up as follows: ‘We had some specific enquiries from Chinese enterprises’. The matchmaking also produced some interesting contacts for Georg Fürlinger ‘An education project was suggested to promote student exchange between China and Europe while at the same time involving companies. We are now planning to work that out jointly.’ Florian Schweer also agreed: ‘We had some interesting exchanges with potential Chinese partners, and there was also some valuable networking within the German delegation.’ It is also valuable to recognise the common global ground. This is how Georg Fürlinger remembers two young entrepreneurs who presented their start-up during the visit to the Urban Development Centre: ‘A passion for business seems to be an element that unites all entrepreneurs around the world.’

Looking back at the Innovation and Start-up Summit also means reviewing the work of the International Community of Practice – Connective Cities. Florian Schweer noted: ‘Connective Cities provides opportunities to get to know experts from other regions. These experts inspire and enrich us with their knowledge and experience. And of course the business contacts that come out of that are also helpful.’ Participants also rated the organisation of the event by Connective Cities very highly: ‘They go about their organisational work very professionally, always studying the material and preparing the events in depth. The materials you receive beforehand are extensive and require a lot of work, but that helps raise the quality of the event. Once participants have done the preparation and worked out where to start, they are then able to hold intensive, in-depth discussions and produce valuable inputs.’ Gabriele Böhmer also gave a positive judgement: ‘The network creates exchange and sharing between people who are geographically remote from each other, but have a great deal in common. This can have a very inspiring effect on everyone involved.’ Georg Fürlinger from Austria concluded: ‘Connective Cities is performing pioneering work. Especially with regard to countries like China, an initiative of this kind to generate and strengthen networking and exchange is important, and groundbreaking.’ 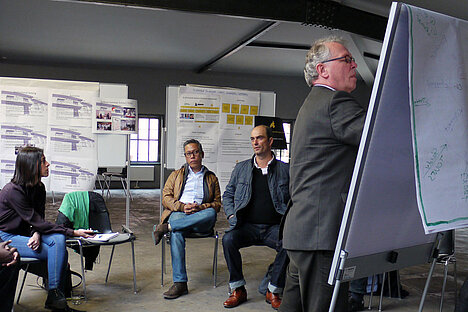 How Local Ecosystems Can Support the Creation of Start-Ups

From the 26th to 28th of May, the third Connective Cities Practitioners’ Workshop took place at Malzfabrik, Berlin. The…