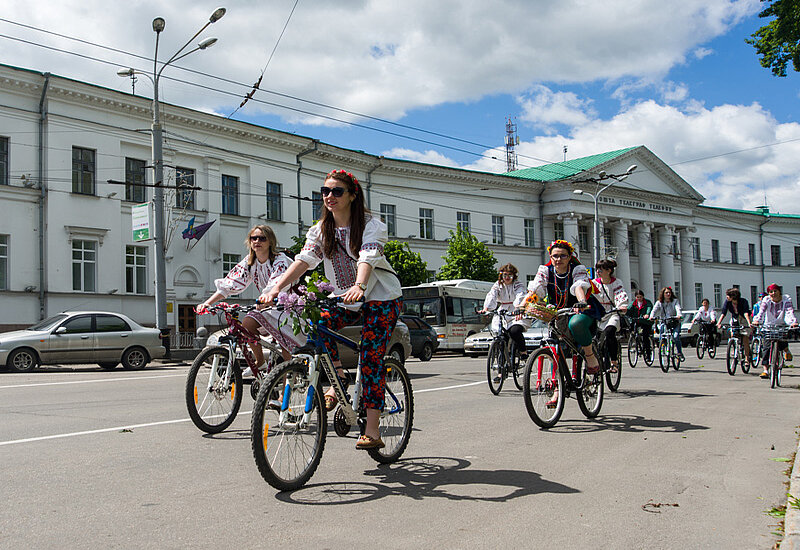 On its way towards becoming more sustainable, the Ukrainian capital of Kyiv is making plans to improve its cycling infrastructure. Natalya Tarnavchyk of GIZ Ukraine has talked to Kseniya Semenova of the Kyiv Cyclists’ Association about the city’s new cycling concept.

Over 20 Ukrainian cities have developed and are implementing strategies for improved bicycle traffic; the importance of cycling as an equal mode of transport is growing. German development cooperation has played a key role in making bicycles popular. GIZ supported Ukrainian cities in their first steps and worked together with numerous NGOs, city administrations, and activists to lobby for and inform about advantages and procedures of developing cycling infrastructure. In 2013, the first 15 km of cycle paths in accordance with European standards were built in the western Ukrainian city of Lviv. A range of practical guides and best practices in cycling strategy development has been developed. The Recommendations on Cycling Coordination by the Road and Transport Research Association were disseminated among interested city councils and cycling NGOs. In 2016, the first rent-a-bike system was established in Lviv. Eco-friendly means of transport will become full-fledged modes of transport in the cities of Zhytomyr, Poltava, Chernivtsi and Vinnytsia within the project “Integrated Urban Development in Ukraine” (GIZ).

In February 2018, the Ukrainian capital adopted a concept for the development of its cycling infrastructure. According to this concept, 240 km of cycle paths will be built in the upcoming five years. <link http: www.urbanet.info ukraine-kyiv-cycling>The long-term goal of this is the creation a network of 1,000 km of cycle paths covering the city of Kyiv, its green areas, and its links with major satellite towns. For Ukraine, it means one more milestone in fully establishing bicycles as a mode of transport. What are the benefits this document has for the city, what impact will it have on the city’s public transport, which steps have been planned in order to promote cycling and who participated in concept development? Kseniya Semenova, head of the Kyiv Cyclists’ Association (AVK) and advisor to the Mayor of Kyiv for the development of the biking infrastructure, answers these questions in an interview with Natalya Tarnavchyk for URBANET.