Towards the Just City in Kenya 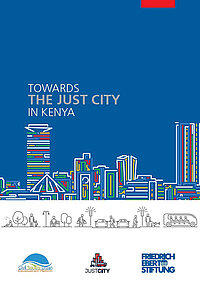 In the next 25 years, Africa’s urban population is set to double. By 2040, the majority of Africans will be living in cities. There are numerous reasons for this: climate change, violent conflicts and the hope of finding work or education, although this list could easily be extended. Urbanisation thus constitutes one of the greatest transformations facing Africa in the 21st century.

Despite the diversity of the African continent, however, they are so far mostly “unjust” cities that people are moving to. The majority live in informal settlements and work under precarious conditions, mostly in the informal sector, without employment contracts and social security.

Towards the Just City in Kenya is the first publication of its kind that explores the conceptualisation and application of the “just city” concept in Kenya. The authors explore the concept from various dimensions, namely:

The study offers recommendations on how the just city concept can be realised in Kenya, looking specifically at urban institutions, citizens’ rights, housing policies and urban public transport systems.

With its just city project, FES Kenya and its partners facilitate dialogues through working groups which bring together civil society, trade unions, Members of County Assemblies, Government representatives, and academia working in urban centres of Kenya with the objective to jointly work for a just city.

The 15-Minute City: A Feminist Utopia?